The EOF (End of Forms) sensor resides at the lower left of the front door opening. It's fastened by two M3x16mm slotted hex head screws w/captive flat washers (4mm A/F hex). Here's a view of it. 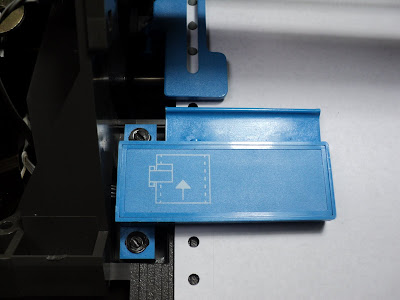 The unit is actually two sensors -- an EOF sensor and a 'hole count' sensor.

The EOF sensor is toward the right side of the unit. It 'watches' for passage of a form's trailing edge, and signals the Logic PCA accordingly so that printing is halted 6.3" later.

The hole count sensor is toward the left side of the unit. It monitors the passage of tractor pin holes as paper is fed. If no hole passages are observed in the course of 2" of commanded paper feed, the printer halts and displays a "PAPER JAM" message.

The sensor's lateral position is adjustable, so the hole count sensor can be perfectly aligned with the holes in mounted forms. There's a little nub on the upper ledge of the sensor's body that indicates the sensor's physical position within. In the photograph, the sensor is slightly off to the right. Perfect alignment of the sensor with forms' holes will preclude false paper jam messages.

The Sensor Test in the Offline CE Tests displays the state of both sensors. For what it's worth, here are the pin assignments of the sensor's cable connection:

There's a black-coloured EOF sensor that I take to be an early version. It has a nub on it for sighting the lateral position adjustment, just as the blue-coloured version has, but it's very different internally. Here's a view of the underside of one. 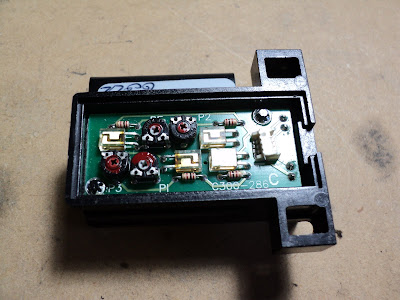 Yikes! Four adjustment pots. That looks to me like a very good thing to stay away from.

The blue version has had the adjustability engineered out of it, and is probably much more reliable as a result.

Should you need to disconnect one of these, watch out. The tiny cable connector is stubborn and very easily damaged. Pry it out gently with a jeweller's screwdriver.