Fuser replacement in the E323 is complicated somewhat by the need to remove the charge roller for access to the fuser. Also, the thermistor cable is strung clear across the machine underneath. The bottom pan must be removed to get at it.

6) Thermistor Cable at Controller PCA
> Two-conductor cable connection at J14. (Lexmark's service manual claims that there are two thermistors in the E323. The second thermistor allegedly connects to a 'J22'. We know of no such second thermistor.)
> Free the cable from the clamp.

11) White Charge Roller Clips
> Remove the clips to free the charge roller from the door-mounted levers. Let the charge roller swing over and rest behind the fuser.
> NOTE the different-coloured torsion springs; the brass-coloured spring is at the left.

12) Torsion Spring Ends
> Unhook them to relax their tension somewhat.

13) Charge Roller Pivot Retainers
> One claw at each. Pull them off.

14) Charge Roller Assembly
> It's now possible to free the left side pivot arm, and then the entire assembly.
> Note the pre-tensioned installation of the torsion springs.

You'll need to remove the top cover from the replacement fuser before installing it.

The E323's pickup roller is a complete shaft/cams/roller assembly that's replaced as a unit.

The following procedure also removes the lower registration roller so it can be cleaned.

12) Pickup Roller
> Two swing-latch bearings.
> Tip the paper input chute forward a bit, and you'll be able to shift the roller shaft rightward to free its left side end.

14) Registration Idler Gear
> Slip it off its spindle.

If you can't get at the Menu Mode by pressing SHIFT + MENU, it's likely because the Operator Panel Function item in the menu has been set to Limited Operation.

Load continuous forms and switch off the printer. Power on while holding SHIFT + MENU. The printer will come up in Menu Mode. Operator Panel Function is an item in the Set-Up group. Change it to Full Operation to restore complete functionality.

Sheets of labels can be troublesome for pickup rollers because of their relatively slick surface on the back. Even new pickup rollers can experience traction failures on them. There is some traction force adjustability in Lexmark's autocompensator arms that may help. Here's a view of it in a T640 add-on tray. 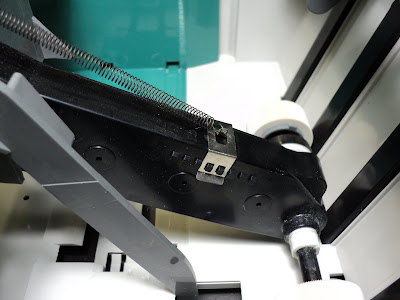 The light spring that extends down the upper side of the autocompensator arm is a counterbalance spring. It's there to limit the pressure the pickup tires can exert when they're turning, so that multiple pickups don't occur.

Note the clip that anchors the end of the spring -- that clip's position is the adjustment. The clip in the photo is set at design centre.

For trays that feed label sheets, move the anchor clip to its uppermost/rearmost position, as in the following photo. 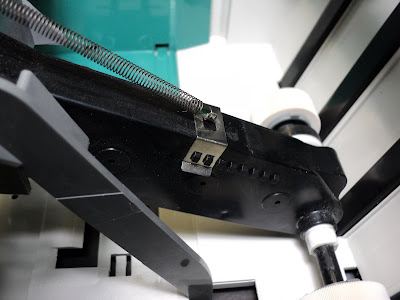 That minimizes the spring's counterbalancing effect, maximizing traction. (On the T640 and T650 integral trays, the clip has been deleted; there's a series of holes along the top of the arm that provide the same adjustability.)

I ran the pictured tray with ordinary paper after adjusting it for maximum traction, and had no double-feeding occur.

For label sheets, it's also wise to avoid third-party pickup rollers. From what I've seen of them, they just don't have the traction of the OEM parts -- either 40X0070 or 40X4308.

We had a machine come in that had been printing 2" x 4" tractor-fed labels. A label was stuck to the face of the ribbon mask, and to the rear suface of the spring-loaded tension plate below the platen. Following are a few notes on how the clean-up went.

The ribbon mask is attached to the printhead by two studs with screwdriver slots in their ends. The one at the left had a broken slot. When I got the complete printhead out and looked at the ribbon mask's attachment, it appeared that the left side stud had been cemented in place at the factory. Why they would do that is beyond me, but it's something to be mindful of. If you go to remove a ribbon mask stud and it can't be loosened easily, stop; you'll just break the screwdriver slot if you keep torquing it harder. Take the whole printhead off and see what you're up against.

Wetting the stuck label with Varsol was helpful for getting it off.

It would have been nice to have removed this item to get the label off of it, but it looked like something I might not be able to get back in without tearing down the whole machine.

I took a sheet of paper towel, folded it in four, dipped it in Varsol and placed it behind the tension plate where the label was stuck to it. After about half-an-hour, the label came away easily. Varsol is a fairly benign solvent, so it did no harm to the adjacent plastic parts.

All-in-all, a good outcome. That Varsol soak saved a lot of work and gave a good result.

(From what I've observed, not all label adhesives are the same. In a case where Varsol is ineffective, try methyl hydrate. It's also relatively benign and won't harm plastic.)