When a P3005 needs a fuser, it's likely to need a set of four associated gears as well. See this post for information on the gear kit.

The P3005's fuser is pretty easy to deal with. Proceed as follows:

3) Rear Door Fully Open
- Tug it open forcefully and it will open all the way.

4) Rear Cover w/Door
- Two M4x10mm pan head threading screws.
- A claw at either side of the Tray 2 cavity. Raise the small door across the rear of the tray cavity to see them.

6) Duplexer Input Guide (The black plastic 'ramp' at the rear.)
- Two claws -- they have ‘handles’ extending rearward.
- Push up on the claw handles and pull the guide toward you.


7) Fuser Power Cable
- Disconnect it and free it from its restraint.

9) Thermistor Cable (Yellow and white.)
- Free the cable from its white restraint. The restraint can be unlatched with a fingernail or a small screwdriver.

Pictured below is a bent paper-out sensor toggle/flag in a Lexmark T630. 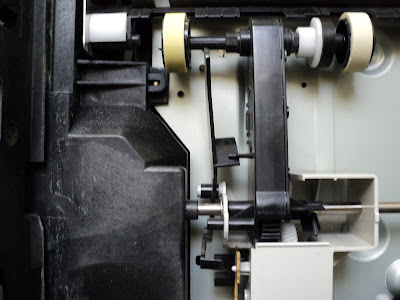 It's often possible to repair that sort of thing by heating the part with a lighter or a heat gun and straightening it. I did that to the pictured part and got a reasonably good result, like so. 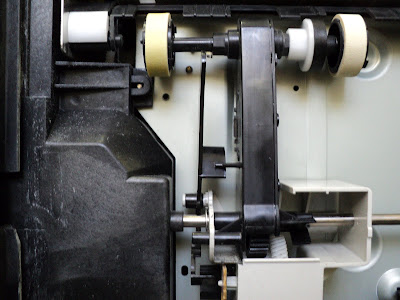 You have to take great care not to overdo the heat. The plastic needs to be heated just to the point where it can be nudged back to its correct shape, but no hotter -- too much heat is likely to spoil the job.

Pictured below is a roller clutch from an HP LaserJet 4100's paper feed assembly. 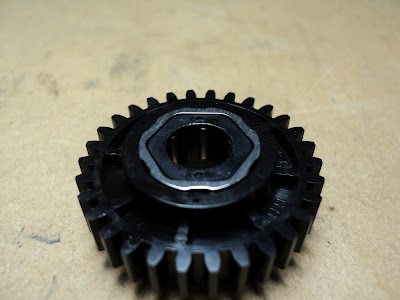 Note the rollers in the bore that give the clutch its name.

Roller clutches all free-wheel in one direction of rotation, and grip the shaft they're on in the other direction. The clutch pictured was slipping badly in its grip direction. When I was trying it by hand with the assembly out of the printer, it would only grip intermittently; mostly it just free-wheeled in both directions.

These clutches are long lasting, but they will get gummy inside as they age, and that causes them not to grip. To restore a slipping clutch, soak it in Varsol for a few minutes to dissolve the gum, dry it thoroughly, then lubricate it with WD-40 on reassembly. Odds are good that the clutch will work fine. The one in the photograph responded nicely to that treatment.

Roller clutches are widely used, and none are immune to gumming and slipping. The result is invariably intermittent, baffling paper jams. It's a good practice to familiarize yourself with where the roller clutches, if any, are in any given machine.

We ran into a T640 giving frequent jams from the MP Feeder. The cause turned out to be a factory defect in the moulding of the lower deflector. Here's a photograph of the flaw. 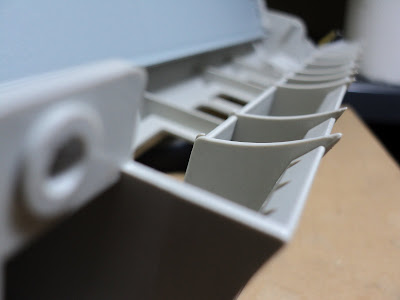 It's not a great photo, but note the corner of that nearest rib -- it extends vertically a tiny bit above the leading edge of the upward-curving ramp portion of the rib. All the ribs were like that, and jammed sheets showed evidence of snagging at the position of the second rib from the right.

Cutting off the tiny upward projections with a sharp utility knife, and filing a bit to round over the corners fixed it. Here's a view of the part after cutting and filing. 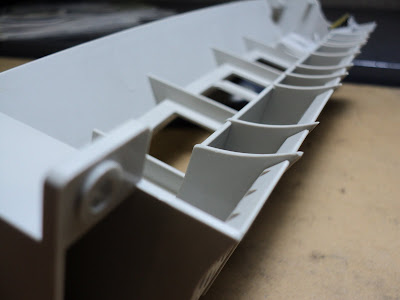 I imagine this flaw results from misaligned moulding equipment. There are probably many such flawed MP Feeder lower deflectors out there.


We've seen several inoperative MP Feeders on T65X machines recently; replacing the pickup solenoid fixes the problem. A service replacement solenoid's P/N is 40X6994. A replacement procedure is included here, toward the end of this note.

It looks like the MP Feeder's pickup solenoid is a bit of a weak point on the T65X -- the redesigned pickup clutch appears to be the reason for it.

The T65X MP Feeders don't employ a wrap-spring clutch, as all the earlier T models and the Optra S did. They have a spring-biased clutch-gear with an arc of missing teeth for a disengagement position. The bias torque that engages the clutch-gear with the drivetrain when the solenoid is energized is derived from the feeder's elevator flap spring, via the slope of the elevator cam's lobe profile. Here's a view of the arrangement from in back. 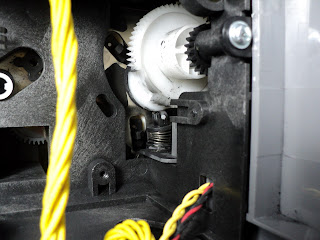 That compressed elevator flap spring is providing a lot of bias torque to the clutch. Consequently, the cam's disengagement ledge is pressing quite forcefully on the solenoid's flapper-end. A subpar solenoid that lacks sufficient electromagnetic force to pull its flapper away  from the cam's ledge will appear to be inoperative.

[MONDAY, AUGUST 20, 2012 -- The following has been revised based on current information.] 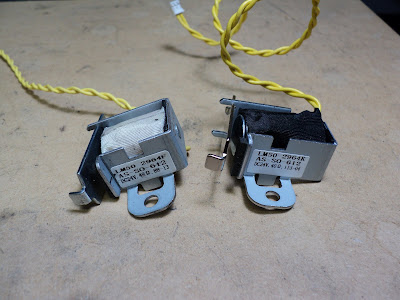 At the left is P/N 40X4365, the old, 12W solenoid. At the right is P/N 40X6994, the new 14.4W solenoid. Note the bigger coil/frame on the new solenoid. That makes it a snug fit where it goes, but it does fit in place, and the extra force it has for pulling the flapper is just what's needed for the clutch it works with.

3) Back Door
- Disengage the support strap from its 'inverted T' slot and pull the door off its hinge pins.

4) Connection Access Cover
- Open it fully and its hinges can be popped free rearward.

5) Lower Rear Cover w/Fuser Access Door -- T650
- Three M3x10mm black washerhead threading screws.
- Open the fuser access door -- two claws.
- Pull the cover away at your left and slide the cover toward your right. A downward-pointing hook will slide off a lip at the rear of the chassis.
- NOTE: The above-mentioned hook makes this an awkward part to get back in place. You have to exactly re-create the cover's attitude as the hook was coming off to get it back on again.

6) Left Side Cover
- Two M3x8mm black washerhead screws in the handgrip wells.
- Two M3x10mm washerhead screws in deep wells in the side of the toner cartridge cavity.
- T650: Tug at the front lip and two upper claws and one lower claw will pop free. The cover's rear hinges come away easily.
- T652: Similar, but there are six claws, and one of them can be quite tenacious. First, pry at the angled upper front lip to free the upper two claws. The troublesome claw is located roughly 3" from the front and 3" from the bottom. You may have to reach in with a long narrow-bladed screwdriver to pry it loose.


8) MP Feeder Platform
- Flex the slide pins' ways to free the slide pins.
- Tip the platform up to vertical and pull it off its hinge pins.

9) MP Feeder Door
- Pry the support arms to pop their pins out of their ways.
- Slide the door leftward off its hinge pins.

10) Upper Deflector
- Pull the extreme left end of the piece toward you and force the deflector to the right. It can then be unhooked at the right end.
- NOTE that reinstallation of this item is complicated by a downward-projecting spike near its left side end. You really have to flex the thing to get it to go back into place.

NOTE: The replacement solenoid has a longer coil/frame than an early solenoid, and is difficult to get in place without loosening off  the MP Feeder Lower Deflector/Elevator Flap Assembly. Remove the two screws that fasten the left side end of the assembly, and you'll be able to gain sufficient clearance to get the new solenoid in place.

The effect pictured below is caused by the printhead. 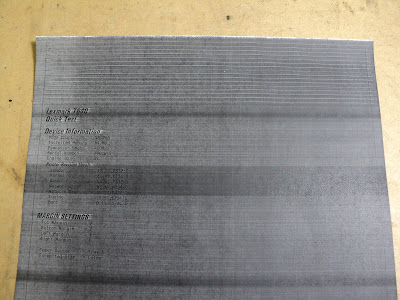 The giveaway is the appearance of sometimes missing, sometimes prominent scan lines among all the murk. That's evidence of the laser diode in the printhead acting up.

Try reseating the printhead's cable connections. If that doesn't work, replace the printhead. Printhead P/N is 40X0062. That P/N is good for all the T64X models.