3) Back Door
- Disengage the support strap from its 'inverted T' slot and pull the door off its hinge pins.

4) Connection Access Cover
- Open it fully and its hinges can be popped free rearward.

5) Lower Rear Cover w/Fuser Access Door -- T650
- Three M3x10mm black washerhead threading screws.
- Open the fuser access door -- two claws.
- Pull the cover away at your left and slide the cover toward your right. A downward-pointing hook will slide off a lip at the rear of the chassis.
- NOTE: The above-mentioned hook makes this an awkward part to get back in place. You have to exactly re-create the cover's attitude as the hook was coming off to get it back on again.

6) Left Side Cover
- Two M3x8mm black washerhead screws in the handgrip wells.
- Two M3x10mm washerhead screws in deep wells in the side of the toner cartridge cavity.
- T650: Tug at the front lip and two upper claws and one lower claw will pop free. The cover's rear hinges come away easily.
- T652: Similar, but there are six claws, and one of them can be quite tenacious. First, pry at the angled upper front lip to free the upper two claws. The troublesome claw is located roughly 3" from the front and 3" from the bottom. You may have to reach in with a long narrow-bladed screwdriver to pry it loose.

8) System PCA/Pan Assembly
- One ty-wrap.
- Twenty cable connections.
- Four M3x10mm washerhead threading screws. (They're roughly at the corners of the PCA.)
- Pull the assembly straight away to disconnect J23, the POWER connector. You may have to wiggle the item a bit to get it to let go. The connection is near the lower rear of the PCA. Here's a view of it. 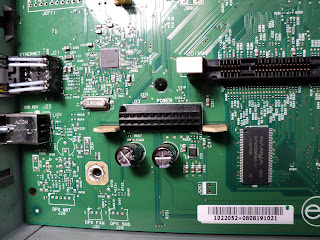 It's much like the PCA connection style that HP has used in many models. Here's a view of the connector pins with the System PCA removed. 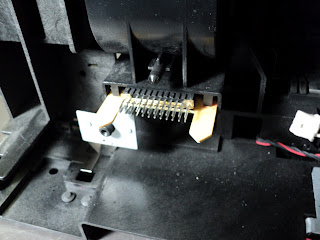 It's something to be mindful of when it's exposed -- the pins are easily bent.


9) Vertical PTO Shaft w/Spring
- Pull it out the bottom of the machine.

10) Fuser Drive Engagement Link
- Gently pry its upper end free of the engagement lever. Rotate the link to where its lower end will come free.

A Visitor to the Building 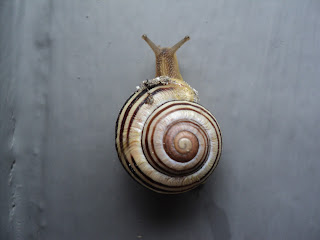 I stepped out for a smoke, and this little guy was creeping up by the door frame. Maybe we can sell him a nice LaserJet 4L -- the speed would suit him fine.

3) Set the printer on its rear.

4) Left Side Bearing
- Unlatch its arm and swing the arm ninety degrees towards you.
- Remove the bearing.

6) Pickup Roller w/Slip Rollers
- Tip out the right side end of the roller to remove it.
- TRANSFER the slip rollers to the new pickup roller. Missing slip rollers will render Tray 2 inoperative. Replacement rollers are P/N RB2-2892.

1) From underneath, free two claws accessible through rectangular openings.

2) Free two claws at the front face of the separation pad. Lift the pad off its steel bracket.

3) Transfer the spring to the new separation pad. A replacement spring is P/N RS6-2021.

3) Interface Connections Cover
- Press two latch buttons at the cover's rear. The cover can then be swung away and removed.

4) Right Side Cover
- Under the cartridge door, there's a rectangular latch button. Push that down far enough and the cover can be slid forward about 5/16" to free it. There's a small claw at the front just inside the Tray 2 cavity that you may need to pry loose.

5) Rear Cover/Door
- Open the rear door part way. There's a pivoting guide rib array inside that can be unhooked to permit the door to drop open all the way.
- Two M4x10mm pan head threading screws.
- Two claws just inside the Tray 2 cavity.

6) Duplex Infeed Guide
- Two M4x14mm YZD pan head threading screws w/captive washers.
- Two small, outward-gripping claws, left and right sides.
- NOTE the three round nubs at the inner bottom of the part. Those must engage first at re-installation, then the part can be tipped back into place.

The left and right side covers, and the rear cover have to come off for access to the fuser.

3) Paper Tray Rear End Concealment Cover
- Pinch inward at its sides and tip it up to remove it.

4) Lower Right Side Cover
- One M3x9mm washerhead screw in front behind the cartridge access door.
- Swing the cover open, pry it free of its lower hinge pin, lift to get it off its upper hinge pin.

5) Upper Right Side Cover
- One M3x9mm washerhead screw in front behind the cartridge access door.
- Two M3x8mm washerhead threading screws at the back.
- Tip the cover up forcefully to remove it.

6) Left Side Cover
- Two M3x9mm washerhead screws in front behind the cartridge access door.
- Three M3x8mm washerhead threading screws at the back.
- Lay the machine on its right side. (MIND the ADF -- it's likely to swing up.)
- Two claws in front.
- Pry/yank the lower end of the cover away and tip it up to remove it.
- Set the machine back upright.

7) Rear Cover
- Back door open.
- Place something like a 1/2" thick catalogue on the scanner's platen glass to keep the ADF assembly propped up a bit.
- Two M3x9mm washerhead screws at either side of the back door.
- Two claws, either side, low down.
- NOTE: The claw at the right is difficult to release because of a sheet metal piece that's in the way. One M3x8mm washerhead screw to remove the sheet metal piece.
- Tip the cover away.
- RE-INSTALLATION NOTE: Make certain that the cover's upper edge is fully hooked in place before reseating the lower claws.

8) Delivery Assembly
- Two M3x6mm washerhead screws at left and right, high up.
- One M3x9mm washerhead screw at lower left.
- RE-INSTALLATION NOTE: This item comes out easily, but it can be difficult to get back in place. It must be presented straight and level to where it sits, else it will fight you.

9) Fuser
- Exit sensor cable connection at J10.
- Thermistor cable connection at J15.
- Pull the two cables inboard through their horizontal rectangular opening in the sheet metal.
- Two M3x9mm bright washerhead screws at sheet metal tabs, left and right.
- Pull the fuser out far enough to get at the AC spade terminals.
- NOTE: The spade terminals are a lock-on type that can be aggravating to disconnect. The female terminals have a lock-nub that must be pressed with the point of a mechanic's pick to disengage it from the male terminal. You may have to slide back the insulating sleeve to do this. The insulating sleeve on the black wire gets baked and embrittled; you may have to ruin it to get the terminal off.
- RE-INSTALLATION NOTE: The blue and black wires must lie fully within their channel at the left side end of the fuser; there's no clearance for them otherwise. Mind the sheet metal tab at the left side end; it's easy to get it in behind its mounting tab, instead of on the outside of it.

In the 1100 printers, items that commonly need attention are:

This procedure deals with all four.

[Note: 'Damper Rods' are the black plastic links attached to the door.]

It's quite a teardown to get at everything. Proceed as follows:

2) Side 'Pods'
- Insert a medium-size plain slot screwdriver at the top of each pod and pry outward. The pods will pop free.

3) Left Side Damper Rod
- Disengage the door end of the damper rod. There's a claw on the white anchor block. Press that and the anchor block can be slid out of its channel.

4) Right Side Damper Rod
- Same as left side.

6) Door
- Two M4x8mm black pan head threading screws.
- Slide the door off the hinge, while observing how it mates with the hinge. Reinstallation can be a bit puzzling if you're unfamiliar with the door's fit on its hinge.
- Tie the door hinge in its raised position with a garbage bag tie. It makes a nuisance of itself if left free to flop about.

7) Front Cover
- Two M4x10mm bright pan head threading screws high up.
- At the lower rear corners of the cover, flex the cover to free it from its retaining studs. The cover can be tipped up somewhat and eased away frontward.
- Slide the damper rods into the printer.

8) Rear Cover
- Two M4x10mm bright pan head threading screws in deep wells.
- Raise the DIMM slot access cover/door. Remove DIMM if present.
- One M3x6mm bright pan head screw w/captive star washer.
- Flex and tip away the cover as you did with the front cover.
- NOTE: At reinstallation, the side guides on the paper supply chute will tend to interfere with this cover. Nudge/pry A/R to get the cover to seat.

9) Paper Supply Chute
- Pry up gently at either side to free it.
- AT REINSTALLATION, watch that the black mylar sheet in front goes straight into place, and won't interfere with paper motion.

11) Pickup Roller Assembly
- Two M3x6mm bright washerhead screws below the printhead deck.
- The assembly slips off the end of the pickup shaft rightward.
-NOTE: At reinstallation, there are two locating nubs at the upper rear of the white 'ears'. Make certain those nubs are correctly seated before tightening the screws.

14) Main Separation Pad
- One white clip.
- TRANSFER the spring to the replacement pad.

15) Left and Right Sub-Pads
- Pluck up their front edges with a fingernail.

Glazed feed rollers will not feed paper reliably. If at all in doubt about the feed roller's condition, replace it before reassembling the machine.

2) Cable Clamp
- Just below the pickup solenoid, there's the mounting stud of a cable clamp. Force it out of place.

3) Lay the printer on its left side.

4) Formatter Pan
- Three M3x6mm bright washerhead screws.
- Swing the pan down from its right side end.

5) Cabling
- Three cable connections.
- NOTE that the white side of the amber cable's end faces up; the contact side faces down.
- Set aside the formatter pan.

6) Amber Cable
- Force the cable's cover rearward to remove it.
- Free the violet cable from two restraints.
- One M3x6mm bright pan head screw w/captive star washer.
- Free the amber cable and pull it out to the front to get it out of harm's way.

7) Amber Cable Trough
- There's a latch tab near the centre rear of the part. Pry that up and you can slide the part rearward to remove it.

10) Feed Roller Assembly
- Lay the printer upside down.
- Pry out the white feed roller bearing at the left side. It has two claws holding it in place that will pop free when you pry.
- Two sensor cable connections. Free the long cable.
- Two M4x10mm bright pan head threading screws.
- MIND the paper-out sensor's toggle as you take away and reinstall the assembly.
- NOTE the tab at the front of the assembly. That must engage correctly with its slot on reinstallation.
- Clean the bearings w/methyl hydrate. No lubrication is needed.

[1] For what it's worth, the individual parts are:
[2] On a machine the age of an 1100, it's a good idea to remove the drivetrain and check that the solenoid isn't sticky. See this post.

Drivetrain removal is straightforward -- one cable connection at the rear of the motor, and three screws.

When unplugging the solenoid, take care that the connector shell doesn't come away off the board along with the cable end connector.